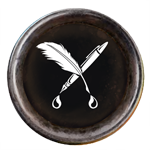 (Hey, Friday fiction is back! I’m sure you were waiting avidly for this. 🙂 I’ve been wanting to write a superhero story for the longest time, so I thought I’d make a serial of it. Written in the style of a personal journal, because why not?)

All right, so grandma gave me this really nice journal and I figured I’d better use it. She’s still pissed that I never wear that awful sweater from two Christmasses ago.

Name is Bryan Boyd, and I’m a sophomore at Saint Francis University. Yeah, it sounds like a Catholic school but it’s not — it just knows how to throw a party like one. Right now I’m majoring in English with concentrations in creative writing and journalism studies. It’s my goal to make a living writing articles for various magazines and newspapers while figuring out how best to break into the creative non-fiction market.

Which means I’ll need to develop a distinctive voice, and that’s something this whole thing should be good with, right? I mean, I’m sure all the best writers out there keep a regular journal of some sort. So I’ll be writing entries like I’m writing some sort of creative non-fiction paper. You know, just to get the practice in.

Oh! In case I leave this in a class or in the quad somewhere: I’m the unusually tall rabbit (about 6’3″ minus ears) with brown fur and a love of rolled-up sleeves and sweater vests. Don’t read past this entry, just look me up and return it. I don’t have much money, but I have some ramen I’d gladly share. I’m in the Caroline House, and my room extension is x76567. Look me up (with the journal) and a bag of root vegetable noodles and a can of PBR can be yours!

I’d hate to think that upperclassmen have a busier schedule than I do. Researching for three essays that are due next week, studying for a damned big test in my last class, trying to make deadline for the school paper and trying to find a restaurant that won’t take the last bit of money I have for Marissa’s six-month anniversary. I’m thinking the Good Earth might be the place to go — just dressy enough and most of their menu is in French without having entrees in the triple digits. I hope she likes tapas.

I think I’m in good shape with my essays, but Frith I could use a break from the computer. So that’s why I’m writing here now. Isn’t it weird how I decided to take a break from writing by writing something else?

Saw Coach Taylor earlier today, he told me he hoped I would try it for the swim team. I was an alternate last spring, and he says he was really impressed with how I handled myself in scrimmages and the like. There are a couple of spots opening up for the season, and he thinks I stand a good shot at being a starter. I don’t know — I’m busy enough as it is, not even considering my class load next semester, but it’d be worth it just to see the look on Anthony’s face if I got a starting spot and he didn’t. That old tiger’s been breathing down my neck about how well-suited his species is for the water and how rabbits are “mediocre” swimmers at best. Oh, the joy I’d get from rubbing it in his bristly little face…

You know what? Fuck it, I’m in. A lack of free time is definitely worth pissing off a douchebag.

Last minute assignment from Kevin; he wants me to cover the field trip to Dynamic Sciences tomorrow for the paper. This, in addition to the two essays I have to finish tonight and the fucking test on Thursday has got my ears all tied up in knots. I’m glad he thinks I’m the best rabbit for the job, but give me a break here, will ya?

It looks like it’s going to be a really late night for me, so I’m gonna go see if there are some coffee grounds I can chew on or something.

Oh man, this week has been a nightmare.

The essays were done — not my best work, mind you, but good enough I think. Nailed the test, though I don’t know how; I barely studied for it. I guess that’s what paying attention to the lectures in class will get you. Most of my work is finished up for the week, except for the article on Dynamic Sciences, but I can do that on Saturday morning. As long as I’m not too hungover that is. I’ve got about an hour before I take Marissa out for our anniversary dinner, so I thought I’d try and wrap my brain around the visit to the lab.

Dynamic Sciences is pretty much the big leagues when it comes to scientific research. It’s the most well-known company not just in this state, but in this country. Heck, probably even the world. If there’s a breakthrough in biotech or genetics or chemistry or food sciences, chances are these guys are behind it or at the very least connected to it in some way. It’s kind of insane how much sway these guys have in that field; if you’re going to Saint Francis because of biology, zoology, chemistry or most any of the life sciences, you’re hoping to get a job with Dynamic Sciences.

They’re a huge company and they know it. The headquarters and showiest research labs are located in downtown Port City, in a maze of interconnected skyscrapers that comprise an entire block near the water. The main entrance is a set of enormous glass doors accented with gilt steel and art-deco design. You’re swallowed into a lobby that feels about as big as a football field, and there’s at least fifty yards between you and the reception desk. Plenty of time for cameras to get a good, long look at you. Plenty of time for their robust security to intervene if someone decides you shouldn’t be there.

We went there with Professor Bundle and his advanced genetics class. It turns out he’s really good friends with the Head of the Genetics Dept. there and managed to score an inside look at some of the experiments that would get them the best PR. There were about a dozen of us there, including me and the professor, and of course one of them had to be Anthony.

Anthony is a sophomore, like me, but he’s smart and athletic and good-looking…well, also like me. The big difference between me and him is that I’m not an asshole. Also, while I’m tall, the tiger is HUGE. Seven feet tall, over three hundred pounds, but as graceful as a dancer. It’d be impressive if he weren’t shoving your face in it all the time. He’s got a lot of power, but his weight holds him back with swimming, so I’m just a hair (ha!) faster. Anyway, he likes to take the piss out of me for some reason, and I LOVE giving it back. I think he thinks we’re friends or something, which suits me fine. If he treats his friends this way, I’d hate to see how he treats his enemies.

He comes up to me during the introduction, where the professor is laying down the rules of the road. “Don’t worry if you get a little lost, little bunny,” he says. “I know this course can be a little over the heads of English majors.” Then he smirks, that big predatory grin that shows all his teeth and I guess is supposed to unnerve me.

“Thanks,” I shoot back. “And in return maybe I’ll tell you a thing or two about how to dress. Orange fur and stripes are really tricky. It must be really hard to not look like a clown. I admire the effort you’re putting into it, though.”

That smile disappears with an annoyed chuff. I’m not ashamed to say I’m proud of that.

So the professor is talking about how big a deal it is that we’re even being let in to the place, and how much of an honor it is to see stuff that almost no one gets to see. He’s laying down some kind of assignment, too — a 10-page paper on one of the experiments everyone’s going to see today, due in two weeks. Most of the class groans while my eyes pop. Shit, this guy doesn’t mess around. I glance over at Anthony, and he’s curiously stone-faced about it. Either he doesn’t think the paper is that big of a deal or he’s still trying to live down the comment about his clothes. For my pride, I like to think it’s the latter.

After that, we go through security. Phones are confiscated(!!) and I’m told that I can’t take my old-fashioned voice recorder either. We have to sign non-disclosure agreements; our guide tells us it’s to keep from secrets getting out to the media or other companies, and discussion under an academic setting is totally fine. Only I’m sure that if they wanted to come down on any of us if they saw something in our paper that they didn’t like, well…they’re legally covered for bringing down the hammer.

After THAT we go through metal detectors, mostly without incident. One of the students is frisked because she has a tongue ring she doesn’t want to take out, and Anthony is just too damned big to fit easily, so they have to pat him down and go over him with a wand and all that business. He’s apologizing for holding up the rest of the class, but I can tell he’s not the least bit sorry by the way he’s smiling. He’s proud, if anything.

The actual tour was pretty amazing. We were shown three or four different experiments, each with pretty crazy implications for medical services and biotech. One that was intensely fascinating was some kind of stem-cell deal where you drink this concoction, it seeks out diseases or injuries and fixes them on an atomic level. Basically, and I’m probably totally wrong about this, but I think it checks your ‘baseline’ DNA or cellular make-up against whatever’s broken and injured, and then basically fixes your cells so that they’re in perfect working order. Sounds like straight-up science-fiction to me, but I might be wrong. To be honest, most of it went over my head. I’ll have to go back to the professor and make sure my notes are correct once I write up the article.

Oh! One last thing — I have Anthony’s sunglasses in my backpack. The asshole actually asked me to hold the case for them once we left the biotech lab with the stem cells. “Be careful,” he says, “they’re really expensive. Like, probably cost more than what you’re wearing.” It turns out he forgot all about them when we left because he was too busy trying to hit on a receptionist, so I made off with them. He’s been blowing up my phone all morning trying to get them back, no doubt. I think I’ll let him twist over the weekend if I can help it.

I’ll bring the case along with me so Marissa and I can have a good laugh about it; what kind of jerk buys $500 sunglasses, anyway?

Posted by Jakebe on November 15, 2013 in Furries, Writing

One response to “Friday Fiction: An Origin Story (Part 1)”