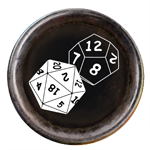 This is a short short story featuring a character I’ll be playing for a friend’s Star Wars: Age of Rebellion game. He is a Togorian (a tall, feline-like alien species with a really interesting sexual dichotomy) who eschews the typical nomadic lifestyle of his species by choice — he views traveling throughout the galaxy as merely an extension of that lifestyle, where he gets to meet all manner of different sapient beings and find interesting technology for his wife. I like playing big guys who are more interested in the intellectual, spiritual or social, what can I say?

Kraugh slouched low in his chair, made sure his hands were under the table, kept his voice low and didn’t display his teeth. He knew that his size and teeth and claws had the potential to put his trading partner on alert, and he really didn’t want that. If he could manage to pull of this score, it’d be a huge boon for the crew.

His ears flicked around the bar as he scanned the riot of people stuffed into close quarters, shouting over each other to be heard. No sign of his partner, but it was early yet. He wouldn’t start to feel nervous about being stood up for another few minutes.

For now, he simply watched people. There were a pack of Bothans sitting in one corner booth, drinking something brightly colored out of a glass as long as their forearms. They were speaking quietly, their big ears turned towards each other, fur rippling in ways that meant something only to them. Kraugh briefly thought about heading over there, buying them a drink and striking up a conversation. He’d bet at least a thousand credits that they had something intensely interesting going down. Bothans tended not to gather in one place otherwise. He shifted in his seat and drained half of his drink in one long draught. The evening would pick up soon enough, he told himself. No need to go chasing excitement when it was coming to him.

A Wookiee and a Twilek sat at another table, speaking animatedly. He could pick up a few of the growls and muted roars of Shyriiwook, but couldn’t make much sense out of the conversation. They were worried about…either a person or a box that had gone missing either three days or three hundred years before. Either way, that sounded intriguing too. Maybe if he listened closer, he could find a way into–

A Rodian slipped up to the table, holding a satchel close against its chest. A shock of reddish-brown hair leapt between its antennae and presumably continued down the back of its skull. Kraugh would have guessed it to be female, but it was difficult to tell with reptilian races. He shifted his weight to stand, thought the better of it, and simply nodded to the empty chair across the table.

<<Thank you.>> It spoke in Rodese; thankfully it was one of the few phrases Kraugh knew.

“Basic, please,” he purred. “I’m sure you don’t want to hear me butchering your language any more than I’d want to mangle it.”

The Rodian sat down with a nod. “Fine. It’s enough of a surprise to see a Togorian away from his homeworld. I guess it’s too much to expect one to speak other languages.”

Kraugh flicked an ear, taking his partner’s measure. Clearly, she was nervous — the smart play here would be to put her at ease. “I’ve picked up a few here and there. You can’t be a Galactic citizen for very long without learning a few things.”

“True.” The Rodian clutched the satchel even now. “Like being brief when you’re making a deal.”

Kraugh smiled, remembered his fangs, and stopped. “I won’t keep you.” He nodded towards the bag. “Is that it?”

The Rodian nodded, shrugging the satchel’s strap from around her shoulder and pushing the package across the table. “Open the bag and inspect quickly. If you need a closer look, you can take it into the refresher.”

Kraugh perked a brow. “You’d trust me alone with the package?”
“You wouldn’t be. There’s a Gamorrean there who’ll be glad to escort you back to the table.”

“You have to be to do what I do for very long.”

“I’m glad you are.” He opened the satchel with the flick of a claw and lifted the flap to peek inside.

The gun looked like the standard issue SE-14r given to stormtroopers with a few modifications. The sight was missing, the barrel was slightly shorter and the overall form factor was a bit sleeker. The pack was notably smaller, presumably to make room for a slightly rounded bulge near the safety mechanism. That could mean only one thing.

“They did it.” Kraugh purred as he closed the satchel and shoved it back towards the Rodian. “They got the gyroscopic sight to work.”

The Rodian simply nodded. “You can fire as many shots with a smaller battery, too. Small, efficient, accurate. It’s a big improvement.”

“But this is only a prototype, right? So what’s the problem?”

“The laser battery is right up against the gyroscopic sight. So if you auto-fire or shoot off a few too many rounds in too short a time, you start to warp the scope.”

Kraugh blinked. “So the more you shoot, the less accurate you get.”

“That’s right. But you don’t want a functional weapon anyway, do you?” It was possible that the Rodian smiled. Kraugh would really have to become more familiar with the finer points of their physiology.

The Rodian clicked once. “A Togorian interested in technology? Now I’ve seen everything.”

Kraugh shook his head. “Oh, it’s not for me. Give me a good sc’rath any day. This is a present for my wife.”

“A romantic Togorian is even more surprising. Who’s your wife? I might have had dealings with her.”

“Give me your name and I’ll see if she knows you. She doesn’t meet many off-worlders, but that could change once her position improves.” Kraugh grinned, showing teeth this time.

The Rodian waved off the comment good-naturedly. “Perhaps another time, then. Once we’ve learned to trust each other.”

“Once you’ve learned to trust me, you mean.” Kraugh dug into the pack at his hip and fished out a number of credit sticks. They were easily hidden in his hand, and he placed them under the satchel. “You’ll find it all there, plus a little extra for making this run so smoothly. Hopefully, that’ll help.”

He leaned back while the Rodian counted the credits and slipped them into her pocket. “It does, a little. It’s been a pleasure, Togorian, but I’m sure you have other places to be.”

Kraugh lifted a brow. “Other business here?” He drained his drink and stood, grabbing the satchel in one big hand. “If you have anything else for me, just pass a word along to Talik. He’ll make sure it gets to me.”

Kraugh nodded and stalked towards the entrance of the bar. It only occurred to him when he ducked out into the heat of the day that this could be some sort of sting operation, but he quietly dismissed it. Just because they were engaged in a number of under-the-table activities doesn’t mean they couldn’t trust one another? There had to be such a thing as honor among thieves, after all.
The Rodian looked to make sure the Togorian was gone before speaking into her comm. “The mark has taken the bait. Repeat, the mark has taken the bait.”